History of the Festival of Native Arts Emblem Tanana artist James G. Schrock-Grant designed in 1974 the Festival of Native Arts Emblem to represent the Alaska Native peoples and their cultures.

A woodcarver from Southeast Alaska is shown carving a totem pole, while the Unangan and Sugpiaq are represented by the hunter carving a wooden hat.   Both the Yup’ik and Inupiaq are represented by the ivory-carver, while a snowshoe maker represents the Athabascan.   In a circle matching each figure are animals used by each of the Native people:   the dog salmon by the Tlingit/Haida/Tsimshian; the seal by the Unangan and Sugpiaq; the whale by Yup’ik and Inupiaq; and the caribou by Athabascans.   The raven in center of the circle, signifying traditional religious beliefs, represents all Alaska Native people.   This beautiful emblem represents the diverse cultures of Alaska.

Logo Contest for the 48th Annual Festival of Native Arts 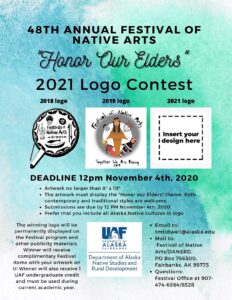 Logo for the 47th Annual Festival of Native Arts

The 47th Annual Festival of Native Arts logo was designed by Destine Poulsen! Destine was born in Dillingham to Julia Kozevnikoff and Laney Poulsen and lived in the village of Togiak until her family moved to Washington State, where she grew up and then moved to Hawaii with her mother and siblings where she attended the 9th and 10th grade at Kuo O Ka La Public Charter school, which was taken over by lava just a few years ago. Then moved to Washington State to live with her Aunt and Uncle to finish high school, she attended Grays Harbor Community College and transferred to the University of Alaska in the summer of 2016 to study art and got accepted into the BFA program in spring 2017. She will be graduating this semester with a BFA in Native Arts with a concentration in Painting.

Logo for the 46th Annual Festival of Native Arts

The 46th Annual Festival of Native Arts logo was designed by Nita Esmailka! Nita is a Native artist who was born and raised in Fairbanks, Alaska. She is Koyukon Athabascan, Klamath Indian, Alutiiq and Basque; her art is largely inspired by her heritage. Nita  loves the Alaskan way of life and looks forward to raising her son in their culture. She  is a senior at the University of Alaska Fairbanks and is expected to graduate in May 2019 with her Bachelors in Art with a minor in Alaskan Native Studies. Having grown up around the Festival of Native Arts she is extremely honored to have her art chosen to represent 2019’s event. 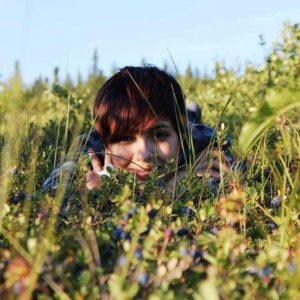 Logo for the 45th Annual Festival of Native Arts

Logo for the 44th Annual Festival of Native Arts

The 44th Annual Festival of Native Arts logo was designed by Allison Castillo. 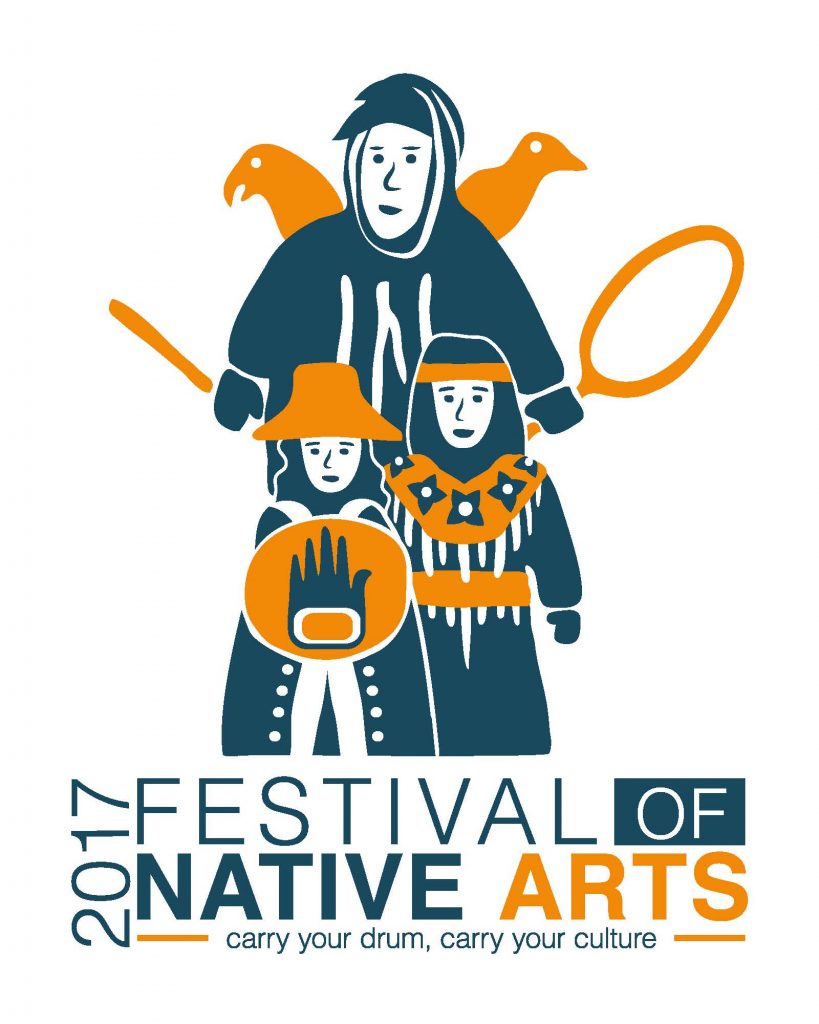 Napaykullayki, Ã‘oqa kani Allison Castillo. Hello, my name is Allison Castillo, I was born in Cusco Peru in the Andes Mountains and was adopted at 6 months with my twin sister and was raised here in Anchorage, Alaska.   I have always been interested in the Alaska Native culture and have over the years have become an active member in the native community with Native Student Council at the University of Anchorage Alaska. I admire the openness the Alaska Native culture has with the community to educate people about the different cultures we have in Alaska.

Graphic design is something I would like to make a career out of. I have done freelance work for local businesses as well as have had the opportunity to work for a couple of agencies as a graphic designer in Anchorage. My inspiration for the Festival of Native Arts logo came from being apart of the Alaska Native culture and understanding the culture from being an intern at the Alaska Native Heritage Center as well as First Alaskans Institute. They gave me a foundation to work from to help me keep pursuing what I love doing. I put patience, love and a lot of effort in making a design for anyone.

This logo design shows unity and preservation. The unity of different cultures and having them be at different age groups shows the preservation and passing down to generation of culture identity and traditions. I am honored have my logo be chosen to represent such an amazing event. I would like to leave a little word of advice; keep pursuing what you love, there will be obstacles and maybe set backs but never let them be the reason to stop pursing what you love to do. Don’t let them define what you are capable of or what you have to offer. Solpyki, thank you.