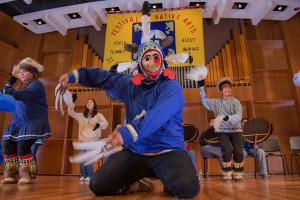 The Festival of Native Arts provides cultural education and sharing through traditional Native dance, music, and arts. The Festival continues the University of Alaska Fairbanks student-led tradition that began in 1973 of bringing together artists, performers, and performance groups in a celebration of Native cultures.

History of the Festival

The Festival of Native Arts unites the major Native culture groups of Alaska, as well as foreign groups of the continental United States and countries such as Japan, Russia and Canada. These groups share their rich heritage of their respective cultures, which not only solidifies the Alaska Native identity, but also educates all people as to the nature of cultures different from ours.

This tradition began in 1973, when a group of University of Alaska Fairbanks students and faculty (representing a variety of colleges and departments) met to consider a spring festival focused on the artistic expressions of each Alaska Native culture. In less than three months, perhaps for the first time in Alaska, Native artists, craftspeople and dancers from all major Native culture groups gathered together at UAF to share with each other, the University community and Fairbanks their rich artistic traditions.

The enthusiasm with which this first festival was received (by artists, observers and coordinators) indicated that a major annual Native event had been born. The first festivals were organized jointly by faculty and students. However, recent years have found the responsibilities of planning and production placed squarely on the shoulders of UAF Native students. The countless hours of making arrangements for housing, transportation, fund-raising, budgeting and more is assumed by these students in addition to their University course loads. Planning now takes place year-round. Such commitment is a testament to a very great pride in cultural values and traditions.

The Festival of Native Arts is a non-profit organization, dedicated to facilitating understanding and appreciation in Native as well as non-Native people.

We thank you, our audience, for sharing with us our cultures and traditions. People of all cultures are welcome here, regardless of whether they’re Native or non-Native, as all cultures have something valuable to learn from each other. Therefore, we go forth together, constantly learning from and appreciating each other with the respect and consideration that all people, as human beings, are due.